I love after-nap snuggles with my little guy.  Here we are watching a little Sesame Street before we start playing again.

Baby its cold outside

It may be unseasonably warm for January, but come on, its still pretty cold out there.  This however did not stop us from bundling up and taking a walk today. 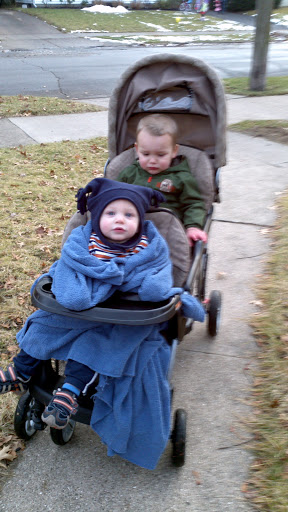 I promise you, Luke was happy during our walk, its just that after we got home I made him get back in the stroller for a picture, and he was not happy.  Matthew looks pretty cute though, doesn't he?

Look what came in the mail as a Christmas present to Luke! Hand knit and beautiful! 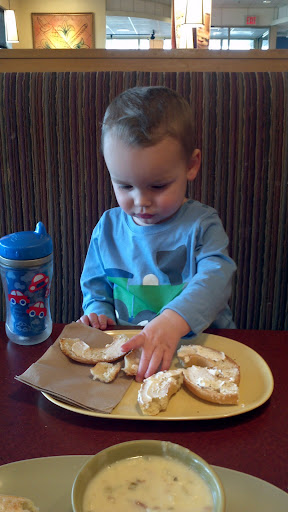 Our little Luke & Mommy date at Panera this morning was so fun and so yummy. Luke is more obsessed with Daddy's Christmas present even than he is.  Thankfully he has not figured out how to turn it on.

We headed right down to Ann Arbor last night to spend a few days with the Williamson family. This morning was presents, and of course, Luke was totally thrilled with his new toys.  Look what's just his size! Pictures of the whole family forthcoming for tomorrow's post.

Our last day in Orlando was finally here. Of course it was 85 and sunny, just to mock us. Tear.  There was time for one more play at the playground before we had to catch a plane home. Another Gorgeous Day by the Pool So when are we going back to Florida??

We spent a late night out at a Pirate Dinner Theater with our siblings & nephews.  The acting may have been a little sub par, but the boys sure had a good time! It was a cold morning; not great weather for sitting by the pool, so we thought we'd head to Disney World.  Apparently everyone else in Orlando had the same idea, because the park was packed to capacity (literally), and the lines were crazy long all day.  But we didn't let that stop us! First stop, a photo op with Mickey and Minnie. We had to show Luke a picture of Mickey Mouse the night before, so that he would recognize him at the park.  Now he sees him everywhere can't stop talking about "Icky Ouse".  His souvenir from the park? A hat with a pocket for a little doll Mickey. Dad, look at that bird! It's talking! Dumbo - oooh yeah. Well worth the one hour wait... Luke's favorite activity was probably waiting in line for the Winnie the Pooh ride. There were lots of fun things for the kids to play with while their parents stood in the queue.